tips: there are some problems in this article. Please do not read it if you really test it.

After more than two hours of testing, it is found that the reason for this problem is that after the crawler was written yesterday, the following attributes were added to the crawler:

Explanation of this property:

The amount of time (in secs) that the downloader will wait before timing out.

It takes more than 20 seconds to get the robots.txt file of a website’s subdomain name. Therefore, even if there are three attempts, it will eventually fail

This value is 180 by default. Because a website is a domestic website, I think all its files will be downloaded very quickly. It doesn’t need to be 180, so I change it to 20. Who knows, robots.txt of its subdomain takes so long:

When the test period is changed to 30, the condition is good. At present, the setting of this value has been cancelled, and the required data can be captured

Delete the errback defined in the request for testing, can also get the required data

So what’s the use of defining errback in a request

Now, the dnslookuperror will not occur if you execute the following command again inside or outside the project (tested) (but how did it happen in the morning?):

— the following parts can be ignored —

Yesterday, I wrote a crawler program to capture news data, but there was an error in capturing the data of a website: timeout, retrying… At first, it exceeded the default waiting time of 180 seconds. Later, I changed it to 20 seconds in the crawler program, so the figure below shows 20 seconds

I don’t know what’s going on! Above is the use of scrapy project based on crawler runner program to run, do not see more data

Try to add allowed in the crawler_ Domains is tested in the following two forms (the second one will be used in the end) – think it has something to do with the subdomain name: it still fails

Later, in settings.py, the robots.txt protocol was turned off and cookie support was turned on: still failed

At this point, relying on the previous knowledge reserve is unable to solve the problem

Using the scratch shell to test the webpage with timeout, we get the abnormal information of twisted.internet.error.dnslookuperror

However, the IP address of the failed subdomain can be obtained by using ping command:

twisted as a very common Python library, how can such a problem happen! Not at all

Help the Internet! Finally, we find the following articles:

How do I catch errors with scrapy so I can do something when I get User Timeout error?

So simple?What does it have to do with handling dnslookuperror errors?Why is it OK to define a callback function

Well, try this method. Change the crawler program of a website as follows:

Added errback = self.errback_ 163, where the callback function errback_ 163 is written in the same way as in the reference article above (it was later found that it came from the official script requests and responses) 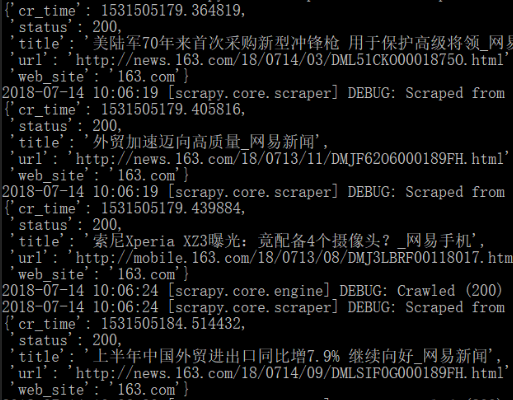 OK, the problem is solved. However, the previous question has not been solved ~ follow up dig it~“ The magic “errback~